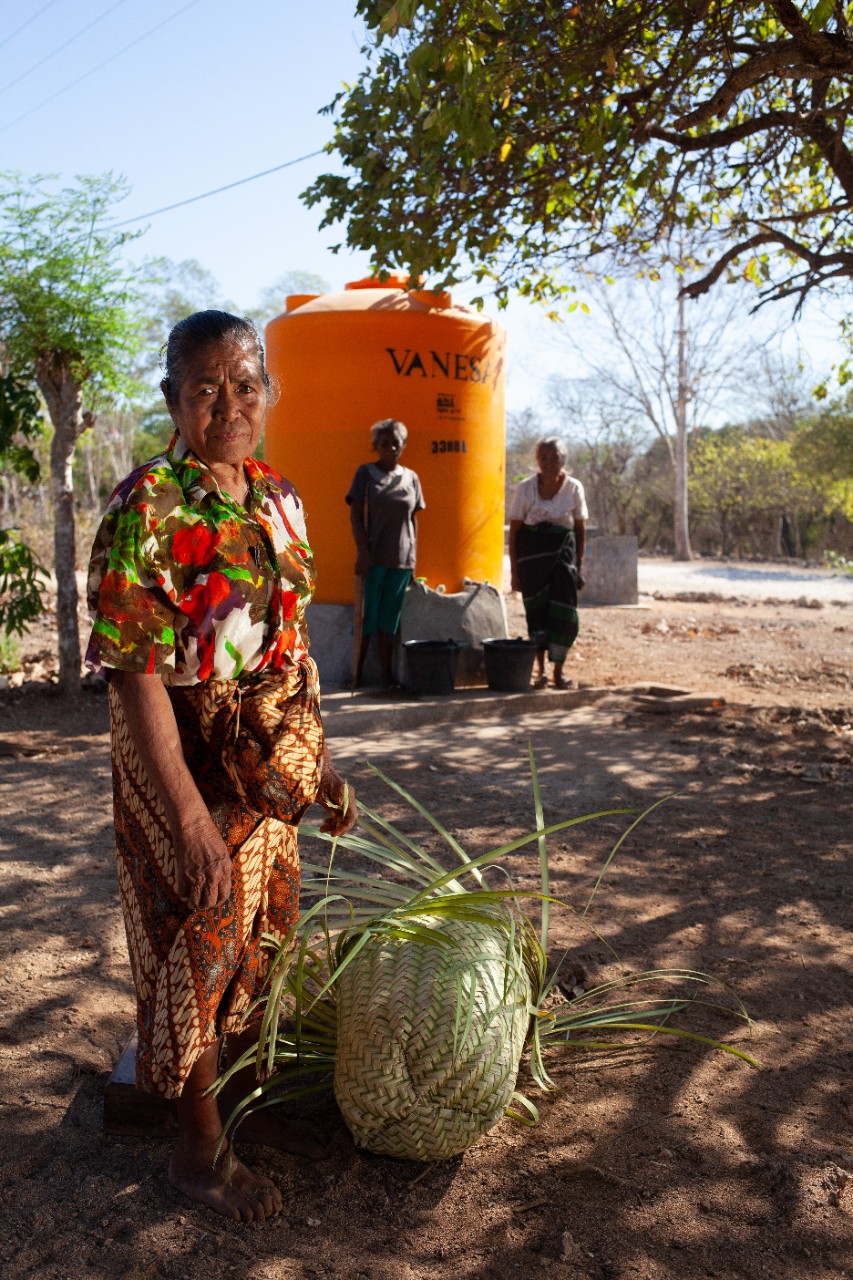 For decades, residents in drought-stricken village of Batuinan in Indonesia’s East Nusa Tenggara (NTT) province had to endure a long walk under the scorching sun to fetch clean water from the springs. Now, under the watchful eye of a much-respected grandmother figure, villagers can easily access water from nearby tanks, powered by the sun.

The ease of water access has been made possible following the completion of a solar-powered water pump system by UNDP Indonesia, with funding from the Global Environment Facility (GEF)-Small Grants Programme. Working with local communities’ group, Cemara Foundation, the water pump system is built with 3,300 liter water tanks.

“We are so happy with the water tanks. Now water is in our arm-reach,” said the 75-year-old Grandma, Hectoreda Ukat, who played an instrumental role in the completion of the tanks, one of which is built in her backyard.

But ensuring equal provision of water to the communities in Batuinan village is no easy feat. It requires a trusted and authoritative figure who has earned respect from the local community. Lying at the heart of the remote island of Semau, the village is not well-served with good roads and transportation system, forcing the communities to be self-reliant with sources of living.

Every morning Ms. Ukat, affectionally known as Granny Eda, oversees the water distribution to 19 families in her village. Each family is given a quota of three jerrycans that they can fill between 7 a.m – 9 a.m. The ratio system ensures a fair distribution of water, making sure that no families left behind.

To maintain and improve the water supply, Cemara Foundation, along several other local communities’ groups such as Geng Motor Imut (GMI) and, CIS Timor have also joined forces to facilitate the replanting of the nearest water catchment area.

While limited infrastructure remains a key challenges, communities are also faced by other constraints such as threats to environmental sustainability and the potential of social conflict due to the scarcity of resources. Semau Island is home to several largely patriarchal communities where men have automatic succession rights. The appointment of Granny Eda as the Doha Bating Ui or any woman for that matter was unheard of, but communities were united to trust Granny Eda due to her esteemed reputation and leadership qualities.

“I feel honored with this appointment, but what’s most important is to remain fair to all families. Everybody in this village deserves clean water, whether for bathing, cooking,” said Granny Eda.

To instill a sense of communal responsibility residents are required to contribute around IDR 5,000 to IDR 10,000 (USD 0.35 to USD 0.70) per month which goes towards maintenance costs.

Reliable access to clean water and sanitation remains an issue in Indonesia, home to the world’s fourth most populous nation. According to UNICEF Indonesia, open defecation and untreated wastewater contaminate water supply and facilitate the spread of diarrhoeal diseases such as cholera. A quarter of all children under 5 in

Indonesia suffer from diarrhoea, which is the leading cause of child mortality in the country.

With a strong woman at the helm, the communities in Batuinan have shown the world that the wisdom of the elderly could mark a new beginning to gain access of water for all.